Raspberry Care at Marymoor by Jane B.


Having a raspberry patch in your garden is a multi-year commitment, and regular pruning is very important. Once planted, raspberries spread by sending out long roots and sprouts, and will always need to be kept in check (see MCGA rules for more details about placement and maintenance raspberry patches in the community garden).
Keeping your raspberry patch within its original boundaries is simple but important. Each spring, pull and prune sprout from roots that come up outside the footprint of the row or patch. 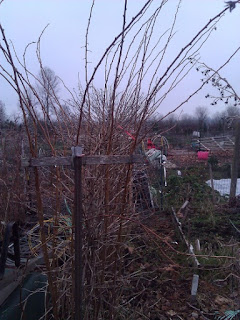 If raspberry patches are not kept in check bad things happen. 1) Your neighbors for one won't be very happy when you encroach on their boarder, or shade out an area of their plot. 2) It becomes hard reach into the center of wide rows, or tangles of raspberry vines to get at the berries. 3) If left year after year, the vines will produce fewer and smaller berries and they’ll become harder and harder to reach.
February is a great time to prune your raspberries, (any time during the winter is ok, but it’s best to do while they are dormant, and before bud-break in the spring).
There are two kinds of raspberries; summer bearing and ever bearing. Each requires different pruning techniques. 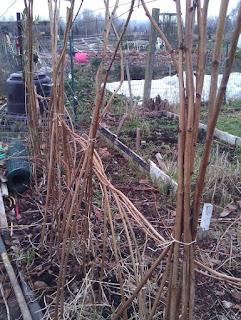 Summer bearing varieties ripen in a short season late June to August (depending on the variety). The fruit is produced on 2nd-year growth (canes). The pruning goal is to cut out the canes that produced fruit last season and make room for the new canes that grew during the summer, because these are canes that will produce the best berries next season. Summer bearing raspberries tend to grow very long canes over the course of the season; mine reach 9 - 12 feet tall. As they grow, I wind them up through the trellis to keep them out of the way, and to and let them grow as long as they want. It's best not to prune these too much during the summer - they are feeding the roots and making stronger vines. 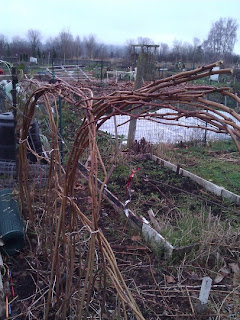 I prune out all of the canes that produced last year, and I take the long canes and tie them to the trellis. This this sets up the conditions for a nice big crop of juicy berries he following summer. Photo 1 show my row before pruning. Photo 2 shows the last season’s growth pruned to the ground, and Photo 3 shows the finished row with canes tied to the wire ready to grow, bloom to grow a new crop this summer.

The second variety of raspberry is the ever-bearing, which produce berries on new growth each year. Mine tend to ripen later in the summer, but they keep producing berries late into the fall. Ever-bearing varieties don't require as much trellising and pruning is really easy. Each winter I simply cut all of the canes to 6 inches above the ground. They rapidly grow new shoots from the roots the next spring, and then produce berries by early august. Ever-bearing varieties tend have smaller berries and a bit less tasty then the summer bearing berries, but they more than make up for this in the volume, ease in growing and length of their season. Try experimenting with thinning the new growth of canes in late spring; this will encourage bigger berries. 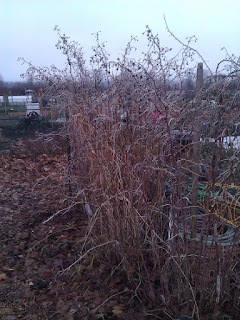 Photo 4 is my row of ever bearing raspberries before they were pruned (yes, I chose a frosty day in January to do the pruning this year). 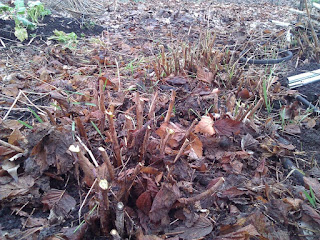 Photo 5 is a close-up to show all of the canes pruned close to the ground.
If you have questions about growing and maintaining a raspberry patch feel free to stop by my garden. I’m in E2-5. Hope to see you in the garden this spring. Jane

Posted by MCGA Board at 7:48 PM No comments: